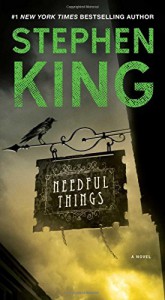 Needful Things is my favorite Stephen King novel. Hell, it's probably my favorite novel, period. I felt that way going into this reread, and those feelings did not change upon reading it for the...fourth time, I think it is now. King nails everything here: exceptional character work, horror and comedy in equal measure, and one of his most memorable endings to date.

I know this novel has its detractors, and that's cool. Different strokes for different folks, brother. This novel is long (but not extraneous, he emphasized) and stars one of King's largest casts. I dig that, and some readers don't. Personally, I love every character here: Buster Keeton, Nettie Cobb, Hugh Priest, Willie Rose — that old Catholic-hating reverend. This novel is King at his most Dickensian: these small town people are folks all readers can relate to; the way these characters' lives intertwine with one another are an absolute joy to read about. And like the best of Dickens's work, this book is hilarious at times. I laugh until I cry every time I read Needful Things; typically I find King's humor to be a little hit or miss. In this 1991 satire, he hits the nail on the head every. single. time. I would wager SK had a ton of fun writing this novel because it's a blast to read. That's not to say this book is lighthearted or breezy; it's anything but. While it has it's hilarious moments, those are contrasted sharply with some of the darkest, most despairing scenes King has ever penned. Why is this book not mentioned in the same breath as Pet Sematary or Cujo when this author's bleakest works are discussed? Some of the text is almost too downtrodden to bare (I'm thinking, for instance, of Cora Rusk's distraction — her longing to go back to her Elvis fantasy — and inability to understand what has just happened to her son. No spoilers!)

As well, it is as relevant today as it was in 1991 — if not more so. For the last eighteen months or thereabouts, I have watched roughly 40% of my country's citizens fall victim to an aging con man, someone who preyed and still preys on the weak, scared, angry and greedy to win the presidential election and further his agenda (or sow chaos; whatever you want to call it). In a sense, this novel feels just as chilling and timely in the Trump era as 1984 or It Can't Happen Here.

Needless to say, this is King's masterwork — at least, for me it is. Some folks would say that title falls to the Dark Tower series or It or The Stand. That's fine. Literature is so damn subjective and every Constant Reader is different. But for me, Needful Things is the tome that shows the impossible heights King is capable of climbing to. He's come close since — and he had come close before this novel released — but this is in a class all its own. My highest recommendation, and then some.

"The goods which had so attracted the residents of Castle Rock — the black pearls, the holy relics, the carnival glass, the pipes, the old comic books, the baseball cards, the antique kaleidoscopes — were all gone. Mr. Gaunt had gotten down to his real business, and at the end of things, the business was always the same. The ultimate item had changed with the years, just like everything else, but such changes were surface things, frosting of different flavors on the same dark and bitter cake.
At the end, Mr. Gaunt always sold them weapons . . . and they always bought."

Confession: I did not take notes while reading this. I know, I know; bad Cody! I just wanted to enjoy the ride.

This is subtitled "The Last Castle Rock Story", so of course it's the punctuation mark on the Castle Rock saga. Connections big and small to The Dead Zone, The Body, Cujo, The Dark Half, and The Sun Dog pop up.

The book's epilogue is set in Junction City, Iowa, which was the setting for 1990's novella The Library Policeman.

The car Ace Merrill picks up for Mr. Gaunt is a Tucker Talisman — a type of car that does not exist, and I am almost tempted to say its name is a reference to The Talisman. As well, when Ace sits in the Talisman for the first time he thinks about how fine a new car smells. "Nothing smells better," he remarks, "except maybe pussy." This line is almost certainly a throwback to Christine, as that same thought is expressed by a character in that novel. Pretty cool.

I am sure there are many more connections to be found here (there are references to Derry and some scenes are set in Cumberland Hospital, which is close to Jerusalem's Lot), but I didn't feel like chasing them. Say sorry.