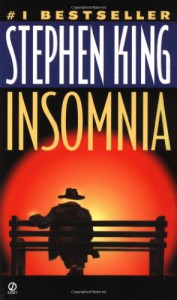 Writing this review is going to break my heart, so I'm going to get it over with as quickly as possible. Deal? Okay.

The most interesting thing about rereading Stephen King's works in chronological order is seeing how my opinions of them change in comparison to how I felt years ago. Experiencing his releases one after the other in publication order puts them in a new light, and that new light can often shine previously unnoticed brilliance or bring dark shadows to my attention.

Insomnia is a novel I used to number among my favorites; after this reread, I cannot, in good conscience, give it a higher rating than two stars. It's just such a deeply silly work. Yeah, the concept itself is one of King's coolest — Ralph Roberts, elderly Derry resident, begins to see strange auras and Little Bald Doctors after developing insomnia in the months following his wife's death — but I feel it's really bungled. Reading this man's novels in order has opened my eyes to this fact: post-drugs King rambles. A LOT. Entire chapters of this novel could have easily been cut; this thing is filled to the brim with exposition. And yeah, of course I want King to explain this strange concept he's come up with, but he holds the reader's hand. Nothing is left to the imagination. And what's more, not much is done with these crazy happenings — said happenings are merely talked about. It feels like the characters spin their wheels at times by ruminating on the same things. Something happens, and the main characters spend an entire chapter discussing it. Ridiculous. The worst offending scene that comes to mind is Ralph and Lois on the hospital roof. If you've read this book, you know what I'm talking about. So much of that chapter could have and should have been axed.

A large component of this 1994 tome is pro-life vs. pro-choice debate going on in Derry. It's almost tearing the town apart, though none of it feels particularly . . . vital? Energetic? Like, it feels as though the reader is really supposed to care about this issue, but King writes it so ho-hum. I dunno. As my friend Aaron pointed out, this plot line really doesn't go much of anywhere; it just gathers everyone up for the finale. Maybe I'm just burned out on politics as of late (despite it deeply annoying me, I stay in tune with the news every day); maybe that's why reading this grated my nerves a little. The entire political aspect of this work adds a cynical, unpleasant flavor to the dish. (And my god, what is up with everyone in Derry apparently owning a super specific political bumper sticker? Seriously. Like, nine or ten times King makes mention of bumper stickers. Weird.)

Laborious and so intricately plotted the energy is totally sapped from this doorstop, Insomnia is, unfortunately, the worst time I've had in the Stephen King reread yet. From the hokey, unrealistic dialogue to the laughably silly climax featuring the Kingfish, I cannot recommend this one. Though filled with cool references to several King novels — especially his magnum opus, The Dark Tower — this hefty volume is a chore to wade through.