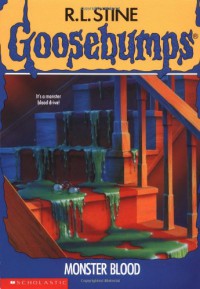 Monster Blood is the first book in the original Goosebumps series I had almost no remembrance of before this reread. I, of course, remembered that monster blood is a green, play doh-like substance that grows and eats things....but that was basically it.

I now know why I couldn't remember much else of it. This book is a complete bore.

Seriously, it took me two days to read this sucker-- I can usually finish a Goosebumps in an hour or two if it's, ya know, more fun than watching paint dry. Unfortunately, Monster Blood fails on even this level.

The plot is as follows: whiny Evan has to stay with his creepy aunt. He meets a neighborhood girl named Andy. Evan whines about his aunt, her house, her cat, the neighborhood. The two go to a "creepy" toy store that fails at being creepy. They buy monster blood....and things get out of control. As it turns out, Evan's aunt's cat is a witch and she (his aunt) has been her prisoner for years. The cat has possessed the monster blood, making it grow and hungry for flesh.

My summary of the book is ten times more interesting than the book itself. Shame, RL Stine. Shame.

I gave this book two stars because of Andy, who is simply one of the most delightful protagonists in all of the Goosebumps canon. She's not afraid to make fun of Evan (one of the most annoying characters I've ever come across in a book) at every turn. She's basically the voice for the annoyed reader, i.e. me. You go girl.

Simply put, I don't see why this book is one of the most popular in this series. I don't see how it spawned THREE sequels, all of which I remember being just as bad as the original. Fortunately, I won't have to deal with Monster Blood II for fifteen more books. Thank God for small favors.

Up next: Smile! It's Say Cheese and Die!