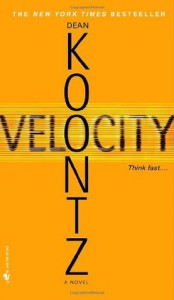 Synopsis: If you don’t take this note to the police . . . I will kill a lovely blond schoolteacher. . . . If you do . . . I will instead kill an elderly woman active in charity work. You have six hours to decide. The choice is yours.

The typewritten note under his windshield seems like just a sick joke. But in less than twenty-four hours, Billy Wiles, an ordinary, hardworking guy, is about to see his life take on the speed of a nightmare. Because a young blond schoolteacher is murdered—and now Billy has another note. And another deadline. This time he knows it’s no joke. He’s racing a killer faster than evil itself. And Billy must accept his terrifying challenge: The choice is yours.

I think I owe Dean Koontz an apology. As of late he's - finally - won me over enough for me to include him in my definite list of "favorite authors" without inwardly cringing. Sure, he's written a few bad books, and yes, he's become rather formulaic over the last decade or two, but overall he ain't such a bad guy. I've always sort of written him off and joked about him, and yeah, he's written some real stinkers (Relentless, anyone?) but the dude has talent.

In case you can't tell where I'm going with this (or if my rating of this book wasn't a big enough clue) I really, really liked Velocity. I bloody loved it, as a matter of fact. It's arguably the best post-hair transplant Koontz book I've read (except for maybe The City or The Taking...hmm...), and I had to force myself to only take in a few chapters a day so I could truly savor the thrilling journey this book took me on.

What immediately makes this book unique, especially when compared to most of Koontz's other novels, is its totally relatable protagonist. The book focuses on one man and the life-changing, life-threatening trials he's put through over a span of a few days. It's vital that the reader like and sympathize with the main character for the story to get off the ground at all, and Koontz nails it. Billy Wiles is an everyman, a humble bartender who has several a acquaintances but is, perhaps, a bit too introverted for his own good. He has no one, really, aside from his fiancée in a coma (and you'd better believe Koontz got a tear or two out of this reader with that subplot). He's an independent, fair-minded, and grounded man, but he really has no one who can help him when he leaves work to find a note - a challenge - left on his windshield, turning his life upside down. He has no psychic Golden Retriever or intelligent child (thank God! - those are two of Koontz's most annoying tropes).... he lives alone, spending most of his time wood-working or sitting with Barbara (his fiancée), writing down anything she happens to mutter in her deep sleep.

What really makes this book cook is even the good guy is forced to get some blood on his hands - something Koontz tries to avoid, often making things seem a bit unrealistic. No one is "all good" or "all bad", and in Velocity the characters are drawn with a bit more gray than one is accustomed to when reading a Dean Koontz story. Don't trust anyone here, because no one is safe. No one is really who they seem to begin with, and that's refreshing. While I love reading Koontz, I'll be the first to admit his characterization is often a bit too cardboard cutout for me. Velocity is a different breed of animal, though - these folks almost come alive and walk right off the page. Major props to Koontz!

I really can't find one thing wrong with this book. Nothing. Nada. If you're looking for a fast-paced (as in, so fast you'll almost suffer from whiplash), look no further. It'll keep you guessing right up till the end, and you'll feel as though you truly know the people Koontz has created. The situation feels like it could really happen, thus making it even scarier. Highly recommended... but maybe not for those who suffer from extreme bouts of paranoia.