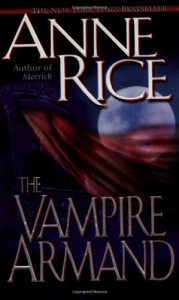 I am giving this book two stars only because Anne Rice is a talented author, and I can’t bear to give this a single-star rating (though, honestly, it might deserve it).

Man, what a bummer. I loved the last four volumes in this series, but this was a mess. Written after a short hiatus from the Vampire Chronicles, this volume follows Memnoch the Devil, which Rice said was supposed to be the series finale. That would have made sense, and it would have been a fine note to end on. Instead, three years later, this mess hit bookstore shelves.

First off, Lestat is almost nowhere to be found here. I think because, up to this point, the Brat Prince features heavily in all the vampire novels that Rice wasn’t sure where to go with this story. Armand is certainly one of the more interesting immortals — for his age, if nothing else — but he makes for a booooooring narrator. He lacks all the wit and humor of Lestat; he has no personality of his own. What a dud. And don’t get me started on the disjointed ‘feel’ of the story: first half is littered with awkward, heavy-handed sex; second half is . . . I don’t even know, dude. Boring AF. I can’t remember a thing that happened. Maybe that’s for the best.

They can’t all be winners. I will be taking an extended break from this series.